I am delighted to inform you that, thanks to the efforts of Bob Hill, we have secured a speaker for our club meeting on Monday 13th November. We shall be joined by one of our former members, Graeme Rimer who is both a historian and a biker.

His illustrated talk is called The Motor Machine Gun Service in the Great War. The title might seem misleading, but the ‘Motor’ bit actually means ‘Motor Cycle’, and Graeme’s talk discusses the formation and something of the deployment in British military service of motorcycle combinations mounted with Vickers machine guns.

His presentation will comprise some 50 images, starting from the late 19th century with the development by Hiram Maxim of the first fully-automatic machine gun, which developed into the Vickers Gun by 1912. The factor which sparked Graeme’s original interest was that among the first specially-designed motor cycle combinations which saw active service in WWI were those built by the Scott company at Shipley (actually Saltaire). His presentation includes quite a few photos of them which few people have seen, but they went down very well when Graeme spoke recently to Scott Owners’ Club and then the NE Section of the VMCC.

The talk begins with a 5-minute modern animation which helps to explain the working and construction of the Vickers Gun, to assist understanding of the weapon which is really the subject of the talk, focussing on motorcycles, all illustrated by slides. The photograph on this page shows a Scott ‘Gun Carrier’ – one of Alfred Angas Scott’s special machine gun outfits. 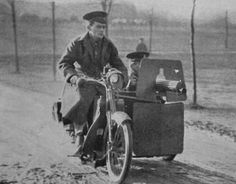 We are very grateful to Graeme for being willing to come along at short notice to add to our programme. I hope as many members as possible will attend for what promises to be a very interesting, different and enjoyable evening. It is not the first time that Graeme has contributed to our club programme. Some years ago, when he was then employed in a senior position at the Leeds Royal Armouries, Graeme arranged a very interesting special visit to the museum for club members which I know was vividly remembered by all those who attended.