First and foremost, we are a bunch of motorcyclists / bikers (whichever you prefer) who love riding bikes. Our group is built on two basic principles:

We are affiliated to IAMRoadSmart and deliver the Advanced Rider programme for them in this area . Our IAM group number is 4246.

The first bit means that we love to ride.

If it has two wheels, we’ll have a go. Riding on the road is the essence of our riding and our training, as we are affiliated to the IAM. Many of us also do track days, off-roading, touring and race schools, in the knowledge that the skills learned can be transferred to the road. And because it’s fun, too.

We organise regular ride-outs, weekends away and even the odd foreign jaunt. Mostly we just want to enjoy riding bikes. So we do.

The second bit is about a process of continuous improvement.

None of us knows everything and we’re pretty sure the perfect rider hasn’t been born yet. So what we do is not just turn out Advanced Test passes, but Advanced Riders (which is not necessarily the same thing). An Advanced Rider to us is someone who has already reached a certain standard but who wants to move on and improve further. Take a look at our training page to see how we support this.

If you’d like to get to know us a little better, then you’re welcome to come and meet us or drop us a line.

Over 50 members make up H.A.B, from all age ranges. Bikes range from 125cc to 2300cc and with just about every different type of bike represented. Age or bike type (as long as it’s over 125cc) is no barrier to learning a Skill for Life!

HAB is run by an elected Management Team, voted in each year during the AGM. These people give their time and energy for free, to ensure HAB continues to provide quality training in a professional manner. 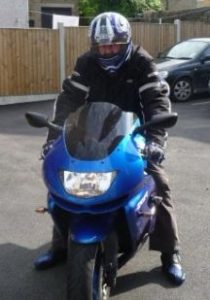 I started riding as a young lad with dirt bikes and anything I could get my hands on, First bike was an old FS1E that we used on the farm. I was always tinkering with bikes and would tune/modify them, strip them down, chrome the frame, powder coat wheels etc.

My first big bike was a GSXR750L in the ’90s. A fantastic bike but I was a typical young new rider. Fortunately, I never came off. With a family etc I then had a gap from biking to my 40’s.

I then bought a ZX9R, totally on a whim. It was very nice but probably not the best choice for how I wanted to ride.

Following that was a Tiger 1050 and I now have a BMW F850GS which is excellent with a very flexible engine and all-day comfort. 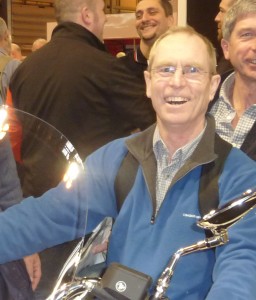 Our Chief Observer is Bob Hill. He started bike riding on a scooter, a Vespa 125 age 13.  He took his test in 1965 on another scooter (Lambretta LD150), graduated to a BSA Bantam and then a Triumph Bonneville which was a dog. After numerous attempts to make it go faster he succeeded and it was written off. At that stage Bob was training to be an architect but gave it up for some fun in the Army. Bob left the Army 15 years ago and is now married, living in Harewood.

In 2002 he joined a biker group and was prompted to get some rider training. So in 2003 he joined the IAM and HAB. He particularly likes long distance and cross country riding. In the last few years he has had a Kawasaki GTR 1000, a Moto Morini Dart and now has a Ducati Multistrada, a BMW K1200RS and a Honda XR125 which is actually Kate’s but he rides it!

Bob enjoys tinkering with bikes and does all his own maintenance and repairs. When asked what his dream bike would be and he found that difficult to answer as really any bike would do. However he would like a ride on the latest Ducati Panigale. 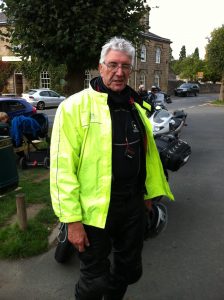 I first rode motorbikes on a field with friends when I was 14 and progressed from there to a Lambretta Li 150 at 16, because my parents thought scooters were safer than motorbikes. I passed my two wheeler test in 1966 and since then, I have been an on/off biker, owning a Suzuki GT250 two stroke first, then a Moto Guzzi 850 T5 and finally part exchanging that for my present bike, a Suzuki GSX 1250 FA, in October 2013.

I did the Police Bike Safe course in 2016 and an observer on it was from an Advanced Motorcyclists Group, who suggested the advanced course. I passed my advanced test in November 2017 and was then asked if I would stand for treasurer of HAB. So here I am! 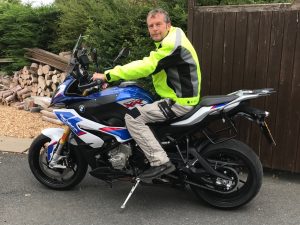 Peter started his biking life in 1973 on a brown and orange Lambretta SX175. His pride and joy was his for £34 in cash and £4 in gift vouchers!

He graduated to a GP200 by which time he was living in Barking and spending his weekends in Yorkshire. The M1 winter commute eventually took it’s toll and the Lambretta gave way to a Hillman Imp Californian – that had a heater and other benefits for a single man.

Peter is married to Karen who recently swapped her “best ever” R1200R for a Street Triple 765 to keep her Duke 390 company. She too is looking for a winter bike and a bigger garage! 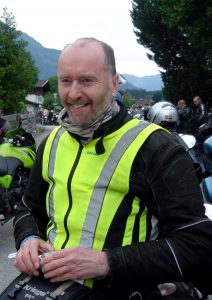 Barry has been a motorcyclist for over 30 years.  Despite having three younger biking brothers, he didn’t start his own biking career until his wife Kathy pinched the car back in 1987.  Not being able to afford a second car he purchased a mate’s CB125RS, became a “Star Rider’, and surprised himself and everyone else by passing his bike test first time.  A Honda XBR500 quickly arrived after that, but riding all year round, wanting to tour further afield and getting the all necessary chain lubrication done proved too much and a succession of shaft drive Hondas followed on.

Working as a retail manager around Yorkshire and Lancashire and having a young family got in the way of adventure and an enforced biking break ensued.  After many years of long distance commuting, transferring to a job in Harrogate meant commuting by car a short distance, but a long journey time wise.  Suddenly a motorbike was the answer and a twist and go Suzuki Burgman appeared.  Now the journey was 15, not 50 minutes!

All was not well however.  Barry had not had any further motorcycle training and was unprepared since he passed his bike test all those years ago.  Alas, filtering alongside the long suffering queue of car drivers waiting at Starbeck railway crossing one day, one of them moved out without checking and down went Barry.  The attending police officer gave some good advice on the day and that was “GET SOME ADVANCED TRAINING then maybe you would have been prepared for that happening”.  Contacting the IAM put him in touch with the fledgling HAB who duly got him through his advanced test at the second time of asking.

Currently trying to wear out his from new in 2011 Triumph Tiger 800 (65,000mls and counting) on any ride-out with HAB and continental tours with his brothers and biking mates.

He has lots of fantasy bikes but sadly can’t sneak any of them past Kathy. 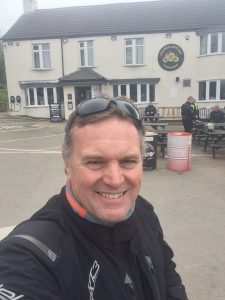 Having had some quite expensive and sporty cars, the mid-eighties were life-changing for Martin. He bought a house, got married and donated his car to Mission Control, thereby forcing upon himself the unthinkable at that time – buying a motorcycle for his commute to work. The snowy ascents and descents of the hills and lanes where he lived, during their first winter together as a new homeowner and unable to afford to buy and run two cars, was a great experiential learning curve for him as a new rider. Come the following Spring, took his test and having been bitten by the bug, decided to spend holiday time touring so bought a shaft drive. His NTV 600 for them both seemed a big bike upgrade then, which provided 2 x 2 week holidays a year visiting every national park in France until they started a family. Twin boys necessitated substituting the bike for another car.  He then brought in motorcycling professionally, so he could continue to ride. Little did he know he would be riding 8 hrs a day nearly, 7 days a week, 47 weeks a year for 20 years, the last 8 of which coaching others how to ride at a decent level, riding BM’s.On retirement, he bought a Limited 50th Anniversary Edition Transalp 600. They were the victim of an assassination attempt a few years later, luckily he survived but the Transalp didn’t. He then bought the then new, near 300 kg Cross tourer for more serious touring and has visited 27 countries, so far.  He bought a KTM 790 Duke as a “Lockdown years” day bike up until 2022 and now has returned to his favourite genre, the Dakar-style bikes, with a T 700.Without exaggeration Martin has ridden over 1.15 million miles at Advanced level and has always been a life-long supporter and advocate of anything to do with riding at Advanced level.  He’s always open and available for top tips and advice on riding. 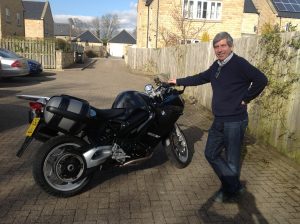 John began riding a scooter (Vespa 150) when he was 16, passing the ‘round the block’ test a few weeks after his birthday. Swapping 2 wheels for 4 until 40 years later when another scooter was quickly followed  by a brand new Suzuki 650 Bandit. Terrified it would kill him he immediately enrolled on the IAM Advanced Rider Course with the Harrogate Advanced Bikes and quickly felt lots more confident and competent on the bike. Once passed the test he felt compelled to help others do the same and trained to be an Observer with the Club and is now a Roadsmart National Observer.